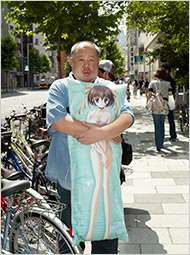 Urban Delice — July 27, 2009 — Life-Stages
References: nytimes & gizmodo
Share on Facebook Share on Twitter Share on LinkedIn Share on Pinterest
There are many psychologists that claim that social networks alienate by keeping us away from real-life encounters, but in Japan, the “2D Lover” is a social phenomenon with its routes in Japanese social status and family traditions, and not in the social networking phenomenon.

2D lovers are men passionate about 2D characters (usually manga) which have been screened onto pillowcases. Doctors claim this is a follow up of the hikikomori phenomenon, when men were afraid to go outside so stayed home.

Doctors say it’s unhealthy that some Japanese men are embracing this new trend due to their lack of interaction with female humans. In a world dominated by emotional crisis and lack of time to take care of our inner self, who are we to say who others should love?
3.9
Score
Popularity
Activity
Freshness
Get Trend Hunter Dashboard

100 Plushtastic Pillows
Plenty of Ways to Get Comfy This Season