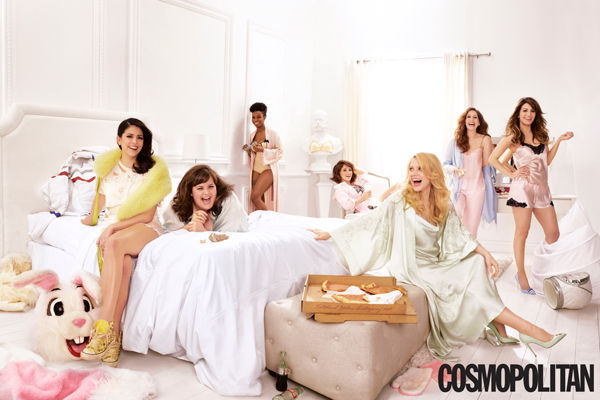 The ‘SNL Sleepover’ is a Provocative Affair

Vasiliki Marapas — April 16, 2014 — Pop Culture
References: cosmopolitan & refinery29
Share on Facebook Share on Twitter Share on LinkedIn Share on Pinterest
The powerhouse female cast of Saturday Night Live is featured in Cosmopolitan’s April issue, in a spread titled ‘SNL Sleepover.’ The funny ladies put on their best-dressed PJ’s—I’m talking silky negligees and lacy boy shorts, it is Cosmo after all—for what I can only assume was a hilarious slumber party.

Though these women—Cecily Strong, Kate McKinnon, Aidy Bryant and Sasheer Zamata, among others—are most obviously known for their comedic acting chops, this editorial offers them a chance to show off a sexier side.

Of course, the interview asks the age-old question about being a woman in such a cutthroat, male-dominated industry, to which the Bryant cleverly responds: “All you need to do is watch Amy Poehler, Tina Fey, Kristen Wiig, or any of the girls in the cast right now. You’re a damn fool if you think girls can’t hang with guys on the funny front.”