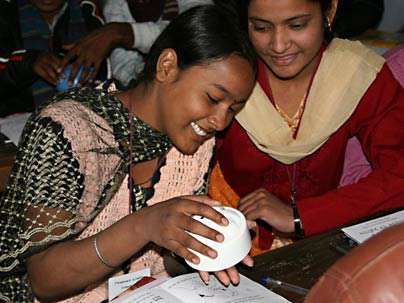 Rose A. Valenta — February 17, 2008 — Unique
References: web.mit.edu
Share on Facebook Share on Twitter Share on LinkedIn Share on Pinterest
According to scientists at MIT, â€œTuberculosis has long been eradicated from the world's industrialized nations but continues to take a terrible toll in a few poor, rural regions of Asia and Africa. Every year, 10 million new cases are diagnosed and two million people die of the disease.â€ As a result, MIT has initiated a uBox-uPhone project, a two-component system, which they hope will save thousands of lives.

The first component of the system, uBox, has 14 chambers that can each be loaded with several pills, which it dispenses from one chamber per day. To alert the patient that it's time to take the medicine, the box flashes its lights and sounds a buzzer. When the compartment is opened, the uBox records the exact time and prevents double-dosing by refusing to open again until the next treatment is due. The second component, uPhone, allows health care workers to record a patient's temperature, weight, and answers to a list of questions related to symptoms, which adds to the set of detailed patient data analyzed by doctors monitoring the study. Field testing of the product began in India, last month.

The problem is not that science cannot cure the disease itself, but that people forget to take the prescribed dosages of medicines. Tuberculosis is cured using a cocktail of antibiotics over a six-month period of regimented daily doses.

I can see this as a stepping stone to assisting senior citizens, who can't remember when they have taken medications, such as blood pressure, heart, diabetes, etc. It can prevent them from taking lethal doses and will allow them to take medication on time.