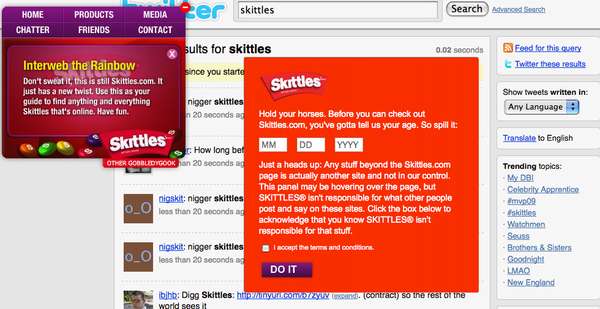 When I visited Skittles.com shortly before writing this story, the front page was literally flooded with racial epithets, one right after another, with the word ‘Skittles’ appended to the end of each tweet. I took a screenshot of what I saw; be advised that the first image in the gallery above is offensive.

A filter for the site’s feed probably would have been a good idea, but instead Skittles.com launched a pop-up disclaimer that forces you to enter your birth date and acknowledge that Skittles isn’t responsible for any of the information other people post on the site.

Is this a sufficient protection for Skittles? We’ll find out soon, I’m sure.
3.3
Score
Popularity
Activity
Freshness
Get Better and Faster