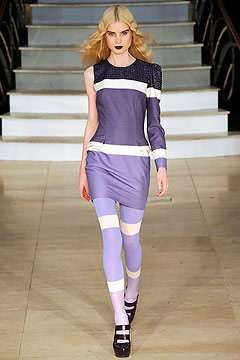 Designers Like Hermes, Gucci and House of Holland Skimp on Second Arms

Henry Holland, one of the most quirky designers on the high fashion scene these days, unveiled a line of dresses with but one sleeve a piece!

“It’s a bit playful,” Henry Holland said. “A strong shoulder on the other side balances it out.”

One could poke fun at these ensembles, and joke that the recession caused the designers to skimp out on fabric, but the ubiquity of the single-sleeve fashion look on recent runways hints toward the idea that this is more than a fad, and that one-armed fashion could soon invade wardrobes everywhere.

Credit-crunched fashionistas, hold onto your wallets: if recent seasons are any indicator, it won’t be long until until fast fashion chains like H&M start rolling this look on their racks.

Want to stand out from the crowd? Try pairing your naked arm with a single, elegant glove!
1.4
Score
Popularity
Activity
Freshness
Get Trend Hunter Dashboard