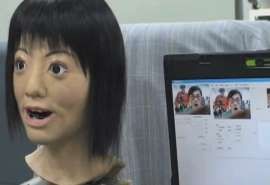 The Singing Robot Head Can Sing Your Baby to Sleep

Souzan Michael — August 19, 2011 — Unique
References: news.cnet & technabob
Share on Facebook Share on Twitter Share on LinkedIn Share on Pinterest
In what may very well be the most mind-boggling new technological innovation as of late, the Singing Robot Head has been created to, well, sing, whatever and whenever you want it to. The creepy-looking robot head is quite smart, however, as it can read any sheet music placed in front of it using cameras that are built into it and then produce the corresponding sounds of the musical score.

An algorithm figures out the pitch, rhythm, and lyrics and sends the information to the robot's voice synthesizer. What's even more fascinating is the fact that the disembodied head also produces facial expressions to match the words and sounds it produces.

The Singing Robot Head was created courtesy of Chyi-Yeu Lin and his colleagues at the National Taiwan University of Science and Technology.

So the next time you're too tired to sing your child a lullaby before bed, place the Singing Robot Head next to them and watch it work its magic.
2
Score
Popularity
Activity
Freshness
Access Advisory Services