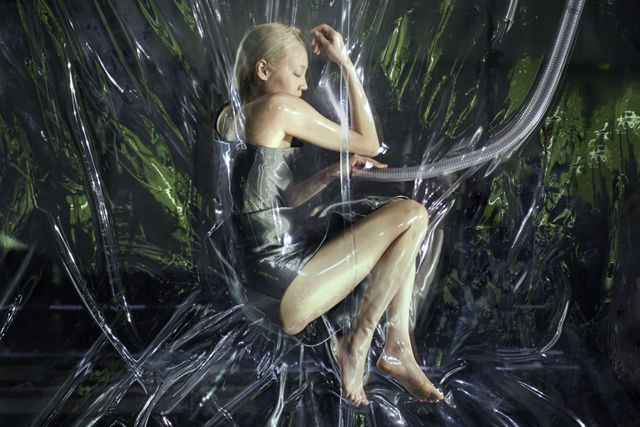 Meghan Young — September 18, 2014 — Fashion
References: irisvanherpen & refinery29
Share on Facebook Share on Twitter Share on LinkedIn Share on Pinterest
Those who thought their job was suffocating will get a bit of perspective after checking out these shrink-wrapped models. Done in the name of fashion, three models, including Soo Joo Park, were placed in molded plastic during Iris van Herpen's fall 2014 runway show, titled 'Biopiracy.' Like something out of a sci-fi flick or a futuristic magic show, the shrink-wrapped models were secured in the fetal position and giving breathing tubes to survive this tight stint.

A commentary on the progress humans have made in terms of decoding the human genome as well as the consequences of scientifically detailing how that affects our species, the shrink-wrapped models is part of the designer's "exercise in the discomfort we feel about technology," writes Refinery29.
0.9
Score
Popularity
Activity
Freshness
Jeremy Gutsche Keynote Speaker