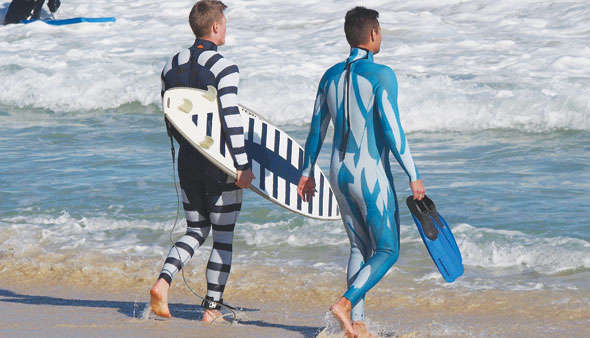 Alyson Wyers — July 20, 2013 — Lifestyle
References: gizmodiva
Are you looking for a shark proof wetsuit? The University of Western Australia's Ocean Institute in partnership with entrepreneurs Hamish Jolly and Craig Anderson created the world's first anti-shark wetsuit. Jolly and Anderson's company Shark Attack Mitigation Systems (SAMS) produced a range of suits to protect people from underwater predators without causing harm to the sharks. The 'Elude' suit protects for divers and snorkelers with a blue and white pattern that uses sharks' light perception and color blindness against them. Similarly, the 'Divert' suit intended for surfers is a black and white pattern that mimics an unpalatable food source based on sharks' perception of danger in the water. This is all possible due to recent research and discoveries about shark eyesight.

So whether you are surfing, snorkeling, scuba diving or preparing for Sharknado, these shark proof wetsuits are definitely worth a look.
5.1
Score
Popularity
Activity
Freshness