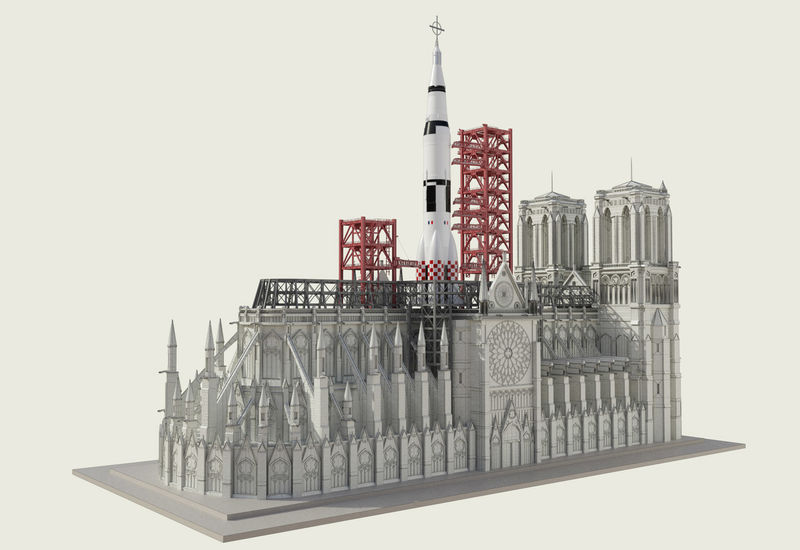 Kalina Nedelcheva — May 29, 2019 — Art & Design
References: meetsebastian & dezeen
Share on Facebook Share on Twitter Share on LinkedIn Share on Pinterest
It seems that New York-based designer Sebastian Errazuriz has had enough with the various proposals for the Notre-Dame rebuild. Indeed, after France issued a call for creative ideas with regard to the restoration of the cathedral, many architectural firms have taken the opportunity to showcase their ideas — from Studio NAB's greenhouse proposal and Alex Nerovnya's glass roof to Studio Tjoa's honeycomb spire and Vincent Callebaut's biomimicry concept.

Now, Sebastian Errazuriz attempts to bring the influx of proposals to a halt with a strategic "act of creative one-upmanship." The designer's concept — not a serious one, envisions a rocket launchpad will replace the roof and lost spire of Notre-Dame. Contrary to popular belief, Sebastian Errazuriz holds that the cathedral should be left unfinished. As a result, his vision is meant to "ridicule every remaining, rapacious architectural firm still circling the carcass of Notre-Dame."
4.2
Score
Popularity
Activity
Freshness
Get Better and Faster