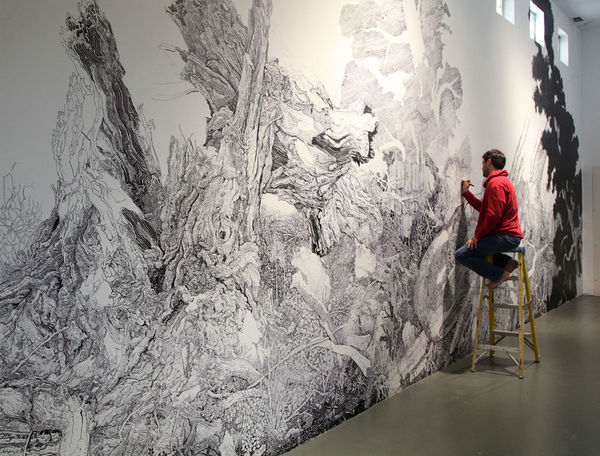 Meghan Young — March 26, 2014 — Art & Design
References: seansullivanstudio.wordpress & thisiscolossal
Share on Facebook Share on Twitter Share on LinkedIn Share on Pinterest
Sean Sullivan, an artist living and working in Lincoln Heights, California, has finally finished a seven month long project at Los Angeles Contemporary Exhibitions. Although, as he puts in his own words, "[M]aybe 'finished' is too strong of a word so let’s put it this way; I am no longer going to continue work on it.' Four months over his allotted time for the project, Sean Sullivan has decided to move on, but he has certainly left his mark.

Titled Grand Pale Maw, Sean Sullivan's sprawling mural was created using nothing more than a black Sharpie. As though the work of an obsessive compulsive person, it is full of intricate detail, depicting a stunning nature scene full of twigs, grass and broken stumps. It's no wonder he's happy with how it turned out.
5.4
Score
Popularity
Activity
Freshness
View Innovation Webinars