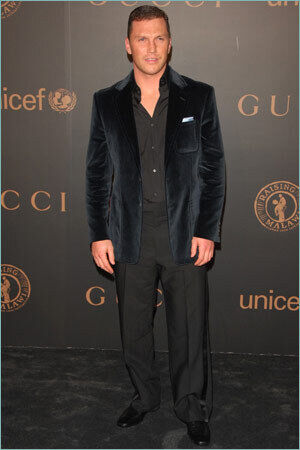 The 28-year-old NHL player reportedly starting his unpaid position this week. Considering he's used to a $1.9 million salary, this shows it's true passion that's the driving force behind the Vogue stint.

"I'll probably get a lot of shit for working at a fashion magazine," he says. "But the girls I've met from Vogue look pretty nice. We'll see who's laughing when I get to work with them."

The Pickering, ON native says fashion has always been his passion, and now he's committed to not letting anything get in the way of his pursuit to live his dream.

"He is ridiculously obsessed with fashion," Avery's publicist, Nicole Chabot, said in April. "He loves it more than anything in the world. It's something he has always wanted to do."

Since the dawn of the lifestyle magazines, millions of people have dreamed of working for a fashion magazine like Harper's Bazaar, Elle or InStyle, with Vogue always nestled comfortably near the top.

It started with Carrie Bradshaw on Sex and the City as a lifestyle columnist. Then once the fashion angle hit harder, the obsession proven to grow as more books about the fashion magazine industry surfaced, most notably The Devil Wears Prada, which also became a smashing Hollywood success. Then there were TV shows like Ugly Betty and reality shows like Miss Seventeen and The Hills. Even before that though were movies like How To Lose A Guy In Ten Days, and comedies like Just Shoot Me.

Also, in January it was rumored by buzzsugar that Tyra Banks was starting a TV show about assistant fashion editors in the making.

So, the obsession with working, nay slaving away, to make it the top of fashion magazines continues... but will this new hockey twist finally offer us something more fresh?
2.4
Score
Popularity
Activity
Freshness
View Innovation Webinars

29 Hockey Hoorahs
In Celebration of The Stanley Cup Championship