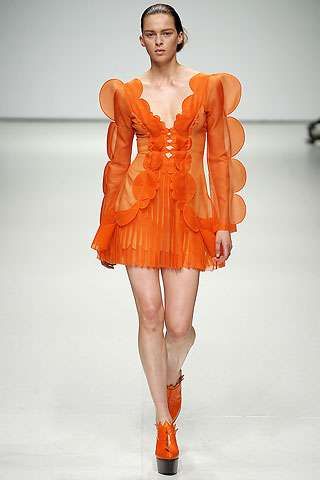 It’s known that Kane played with dinosaur toys as a little boy, but he surprised all who knew him when Kane began work on a collection that literally featured terrible lizard-like scales.

Christopher Kane used the scallops to frame shoulder lines and run up and down skinny pants for his Spring 2009 RTW collection. They were also used in clusters to give a full-out scaled effect, which echoes other design cues we’ve seen this season that are devoted to simple, geometric shapes.

What truly caught my eye, however, was Kane’s ability to use the same scalloped effect for edgy, rocker-chic looks as well as lovely, feminine creations within the same ready-to-wear collection.
2.3
Score
Popularity
Activity
Freshness
View Innovation Webinars