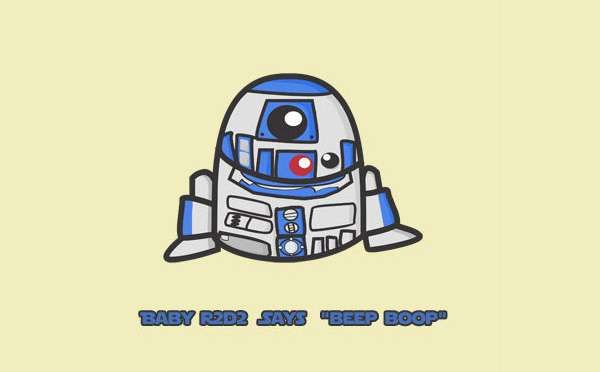 Jason Soy — May 30, 2012 — Life-Stages
References: etsy & blog.thaeger
Share on Facebook Share on Twitter Share on LinkedIn Share on Pinterest
Love for the Star Wars series from artists is undying, and Sarah Allen has contributed to the overwhelming amount of Star Wars fan art available on the Internet with her own cartoon drawings of the cast. Where Allen’s work differs from others, however, is that she’s decided to depict the likes of Chewbacca, R2-D2 and a Jawa as babies. How can there be such a thing as a baby R2-D2 robot? Who cares? These images are fricken’ adorable.

Along with each image, Sarah Allen denotes the noises that the characters would make. R2-D2 communicates with “beeps” and “boops,” Jawas go around uttering “utinni” and Chewbacca lets out hearty “Aaaughs.” Surely, Allen will expand the series to include other cast members like Jabba the Hutt and Ewoks.