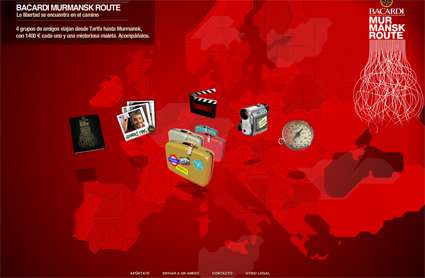 Bianca — November 3, 2007 — Lifestyle
References: murmanskroutebacardi & adverblog
Bacardi has sponsored 12 backpackers to traverse from Spain to Russia on the Murmansk Route.

The company, known for its popular rum beverages, launched the social campaign under the name Bacardi Murmansk Route. The project kicked off in October in Tarifa, Spain and will continue until the groups have made the 6,000 km trek to Murmansk, each with only 1,400 Euros in their pockets.

The groups, Uno, Dos, Tres, Quatro, will host blogs throughout their excursion, sharing their tales, photos and video clips as well as allowing comments from site visitors to encourage them on their ambitious journey.

Upon arrival at their Russian destination, the travelers will be met with a locked treasure chess, the content of which is unknown. I'm willing to bet it's the same kind of treasure Jack Sparrow would be happy to find -- a good load of rum, from the straight stuff to Breezers.