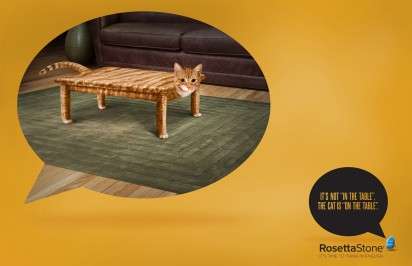 Meghan Young — May 10, 2012 — Marketing
References: almaddb & ibelieveinadv
Share on Facebook Share on Twitter Share on LinkedIn Share on Pinterest
If it is easy to miscommunicate in one's own native language, it is only natural that it would be a 100 times more likely that will happen when speaking a foreign language, which the Rosetta Stone campaign hilariously shows. In this case, the ad campaign encourages people who speaks english as their second language to start thinking in english.

The Rosetta Stone campaign was conceived and executed by Alma DDB, an ad agency based in the United States. It was art directed by Hernan Pettinaroli with creative direction by Diego Yurkievich and Hernan Cerdeiro. Photographed by Michael Bailey, the misstated phrases were brought to life in interesting ways. For instance, instead of saying "the ducks are in line," "the ducks are on line" is said. This is accompanied by a row of ducks on computers.
5.7
Score
Popularity
Activity
Freshness
Jeremy Gutsche Keynote Speaker