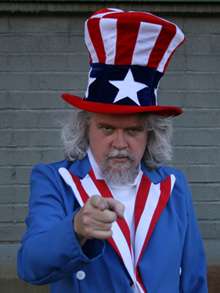 Tisah Tucknott — July 18, 2009 — Business
References: popaganda
Share on Facebook Share on Twitter Share on LinkedIn Share on Pinterest
It is safe to say that Ron English has blown many of us away with his outlandish works of art. His eccentric creativity has led to the creation of some of the most memorable pieces of art. Whether commercial billboards, album covers, or paintings, Ron English will surely leave a lasting impression.

1. How to you keep your work on the cutting edge?

I think the most important aspect of the creative process is to turn off the self-censoring mechanism in your brain and let your ideas flow. You can edit later in the studio before the work goes out to the public.

I wake up every day with a new idea. I also have a lot of ideas in the shower. New ideas are fragile and should be documented before they are forgotten.

I don’t usually throw away an existing idea although I often revisit an old image and do it in a new way, especially if the image isn’t being embraced as I think it should.

For example, Cathy Cowgirl was more realistic for the first few years and people were too offended to embrace her, so I made her a bit more cartoonish. A lot of my characters were creepier when I originated them and have since evolved into something more cute and cuddly.

4. How did you get involved in brand imagery and advertising, and what motivates you to continue?

Modern branding taps into a basic human instinct, tribalism. People are defining themselves through brand associations and alliances with corporations they perceive as powerful tribes to which they want to belong. Ultimately their personal identity is an amalgamation of consumerist connections to a variety of brand identities they desire association with.

Often the brand identity is stronger than the actual product. My consumption habits, especially the more visible brand choices such as clothing and cars, define me as part of a small but global hipster/intellectual tribe.

5. How significant are the topics of cool hunting and trend spotting in the world of pop art?

The new pop isn’t the flat line cool embrace and confirmation of pop culture that the original pop art was. To create their art, the first generation pop artists had only to consider the pop culture already laid out before them and re-purpose the imagery as high art with an ironic edge.

The new pop exercises a different, often more schizophrenic engagement with pop culture. Scrapping the cool distant gaze of our pop forefathers, the current generation glides easily between parody and embrace of pop culture, skewering ubiquitous pop icons while simultaneously inventing their own pop icons and introducing them into the culture.

Artists operating in this new landscape not only have to be hyper vigilant trend spotters, they have to push far ahead of the curve.

A cultural phenomenon that seem inevitable after the fact.

Something that is an interesting amalgamation of new ideas and attitudes.

8. Do you need a culture of innovation to create something that is cool?

Yes. Unless you think the Dark Ages are cool.

9. What is the best way to create an infectious idea, product or service?

Fill a void with something new, clever and intriguing.

10. What is the key to innovation?

An open mind and a wealth of ambition and information.

11. What are the most important trends you see in advertising?

12. Professionally, what do you want to be doing or studying in 10 years?

Hopefully I won’t be studying the underside of my tombstone. I would like to expand my art and creations into a broader range of formats.

13. What are your most important hobbies?

I really enjoy writing songs with good musicians. Mostly I write with Jack Medicine for The Electric Illuminati. I also love making and collecting toys. Any activity that I can do with my kids is the best.
1.9
Score
Popularity
Activity
Freshness
Jeremy Gutsche Keynote Speaker