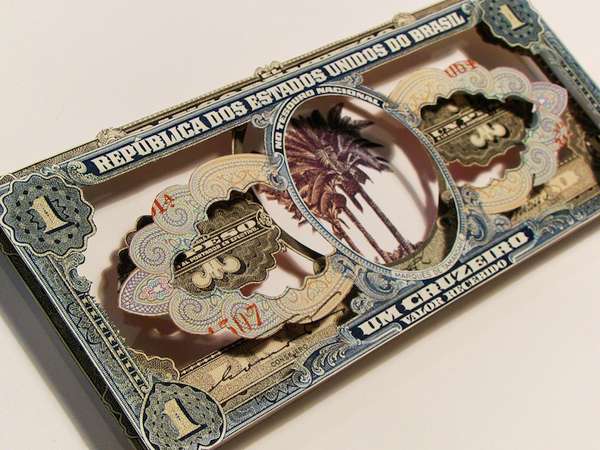 Meghan Young — June 15, 2012 — Art & Design
References: flickr & visualnews
Share on Facebook Share on Twitter Share on LinkedIn Share on Pinterest
Money has been explored by artists as a unique material to work with before, but instead of focusing on one country's currency, Rodrigo Torres involves banknotes of the world. Similar to the work of Scott Campbell, Rodrigo Torres creates cutout sculptures with the banknotes of his choice. Unlike Campbell, he puts together a scene that is reminiscent of a popup book, adding a story-like context to each one.

From the Mexican peso to the now defunct Greek drachma and Chinese yuan, Rodrigo Torres's multi-colored and multi-cultural artworks denote a sense of harmony and unity in the world. He writes, “I try to intervene in a way that has something to do with the fabrication process of that object. [I]n banknotes, I make some interventions with the stylus, very meticulously, because it has to do with the work of the engraver, what he has done there.”
5.8
Score
Popularity
Activity
Freshness
Get Better and Faster