Getting Freaky With Mannequins & Animals 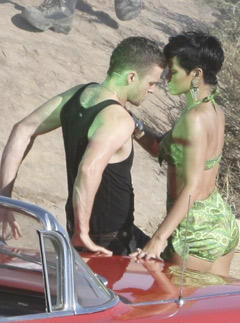 Rihanna and Justin Timberlake Team Up in ‘Rehab'

Justin joins Rihanna, who is dressed in gold stilettos, fishnets and a series of playsuits, in an emotionally-charged scene where the pair get hot and heavy on top of the hood of a red car.

In another scene, Timberlake, who is wearing all black, takes off the jacket and takes a shower in what appears to be pink water.
1.9
Score
Popularity
Activity
Freshness