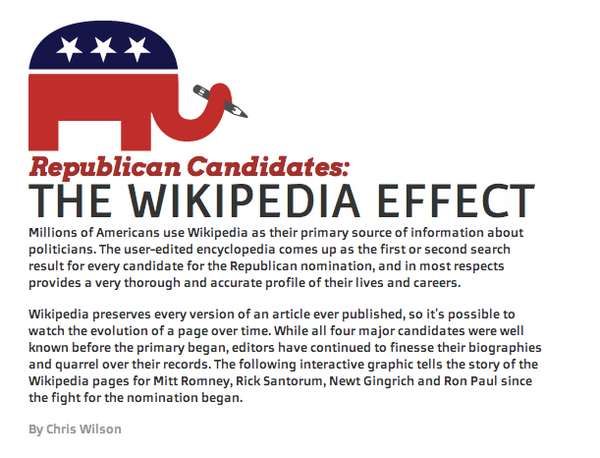 The ‘Republican Primary as Told by Wikipedia’

Jennifer Gosnell — June 22, 2012 — Pop Culture
References: news.yahoo & columnfivemedia
Share on Facebook Share on Twitter Share on LinkedIn Share on Pinterest
The ‘Republican Primary as Told by Wikipedia’ is a fascinating new interactive graph that allows users to see what issues have been on the forefront of the 2012 Presidential election based on the Wikipedia coverage, and which have been buried as a result.

The largely utilized website preserves all the information that has been input into the database, though changes are made by editors and users of the site. Throughout the election, the forefront runners -- Mitt Romney, Rick Santorum (dropped), Newt Gingrich (dropped), and Ron Paul -- have all had major events in the election that have affected their Wikipedia coverage.

The hand graph gives a great overview of what has been the most prominently mentioned, covered and forgotten about. Controversial issues such as the Romney’s dog Seamus (who has received widespread media attention) have been greatly edited and given a much more vanilla Wikipedia spin.