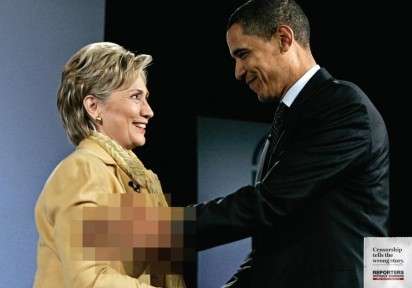 The Reporters Without Borders 2011 Ads are Easily Misinterpreted

Meghan Young — June 24, 2011 — Marketing
References: ogilvy & ibelieveinadv
Share on Facebook Share on Twitter Share on LinkedIn Share on Pinterest
I really like the direction that the Reporters Without Borders 2011 ad campaign has taken. It illustrates just how dangerous censorship can be, in a way that is both unexpected and clever. Instead of focusing on the wrong it can do to the public and us average folk, these print ads actually center on the 'inappropriate' actions of our politicians.

Conceived and executed by Dubai-based ad agencies Memac and Ogilvy & Mather, the Reporters Without Borders 2011 ad campaign shows that censorship can often be misinterpreted. With the tagline, 'Censorship tells the wrong story,' the blurred-out images of David Cameron, Barack Obama, Hilary Clinton and Vladimir Putin are read as rather perverse when in fact they are completely innocent.