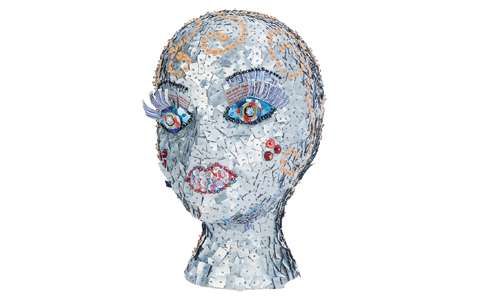 Red Bull Art of Can Exhibit

Bianca — February 8, 2008 — Marketing
References: redbullartofthecan & redbullartofcanusa
Share on Facebook Share on Twitter Share on LinkedIn Share on Pinterest
A while back we featured the Art of Can Exhibit which challenged artists to get creative with Red Bull cans. The works the artists put together are truly amazing. They have worked the silver and blue aluminum cans into the most magnificent sculptures. I suppose after consuming that much caffeine, you'd have the energy to put those creative juices to good use!

The gallery show some more of the incredible submissions that entered the contest, including the intricate sculpture of a female face, complete with eye lashes. It was created by fashion designer Francesca Sloan.

"I cut small squares out of the cans to make the mosaic 1920s Barbie head," she said in an interview with uwish unu. "Used different parts like the barcode for the eye lashes and the red bull logo for different parts of the pupil along with the different blues on the sugar vs sugarfree cans to shade the face."

There have been several exhibitions already, but the final event happens at the Houston Galleria from July 11-25, 2008, with final submission deadline on April 6, 2008. Think you've got a shot? You better start chugging!