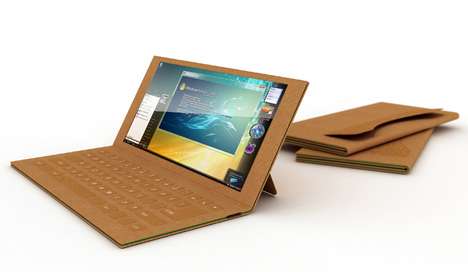 The Recyclable Paper Laptop is an Eco-Friendly Alternative

Meghan Young — November 3, 2009 — Eco
References: yankodesign
Share on Facebook Share on Twitter Share on LinkedIn Share on Pinterest
At first glance, the Recyclable Paper Laptop looks ridiculous. At second glance, it still looks ridiculous, but an appreciation for the attempt begins to bud. By the time I started to really take in the concept (not the actual design per se), the appreciation not only bloomed, it became a full-blown bouquet.

According to designer Je Sung Park, considering the fact that disposable cameras and cell phones are fairly popular, he believes that the next big step involves this Recyclable Paper Laptop. Although the design looks absolutely implausible, I think there is something in the idea, at the very least.
5.7
Score
Popularity
Activity
Freshness
Get Trend Hunter Dashboard