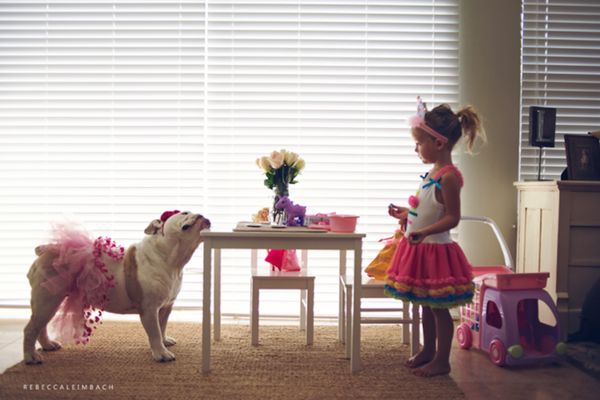 Meghan Young — March 18, 2014 — Lifestyle
References: rebeccaleimbach & mymodernmet
Share on Facebook Share on Twitter Share on LinkedIn Share on Pinterest
As inundated as the Internet is becoming of cute children and cuter animals posing cutely together, people will not be getting sick of the images so long as photographers such as Rebecca Leimbach continue banging out intimate moments like these. The relationship between a puppy and a baby is precious, especially as they grow up, and Rebecca Leimbach has documented such a relationship between her daughter, Harper, and the family English Bulldog, Lola.

Although the images look complete posed, Rebecca Leimbach had nothing to do with the original inspiration behind them. She says, "One day Harper came out of her playroom with Lola dressed as a princess and I realized, she has a playmate, the best kind in fact, one who doesn't argue over being dressed up."
4.7
Score
Popularity
Activity
Freshness
Get the 2021 Trend Report FREE