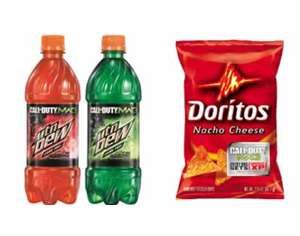 Call of Duty is about more than simply shooting at other players. Instead, the game revolves around "experience points" which confer rewards, new weapons and, ultimately, more victories. Normally, experience points are earned by performing harrowing tasks in multiplayer matches, but Pepsi Co. intends to change all that with their new Rank Up promotion.

Starting at Modern Warfare 3's launch, gamers who purchase specially branded Doritos and Mountain Dew products can redeem in-game codes that double and triple the experience points they receive, utterly destabilizing the community of millions. Although product partnerships are a common element in most modern games, it's a sensitive topic in the industry and it seems that publisher Activision has genuinely angered its legion of loyal consumers with this promotion.
0.9
Score
Popularity
Activity
Freshness
Get Better and Faster