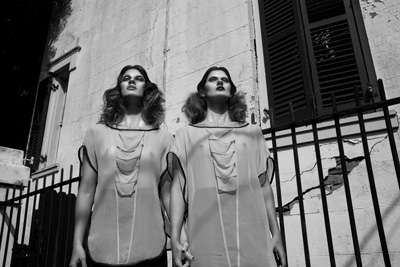 Katherine Vong — October 13, 2011 — Fashion
References: queduong_ & designscene.net
Almost every child goes through a phase in which she plays with an imaginary friend; this is typically considered cute. But in this editorial by photographer Que Duong, an adult imaginary friend is anything but.

More than a little eerie, this shoot is aptly titled 'The Imaginary Friend' and features twin models Kim and Misty Ormiston. While it is unclear who is the "real" person and who is the imaginary friend, the spread is undeniably creepy, with its black and white captures, ominous backdrop -- a deteriorated estate -- and scary-looking makeup by Alexis Williams. (In one capture, one of the models looks definitely more possessed than she does a good friend!)

Styled by Veronica Cheri, this photo series by Que Duong displays a pair of cute wedge Mary-Janes and a short-sleeved shift dress, among other chic pieces.
3
Score
Popularity
Activity
Freshness