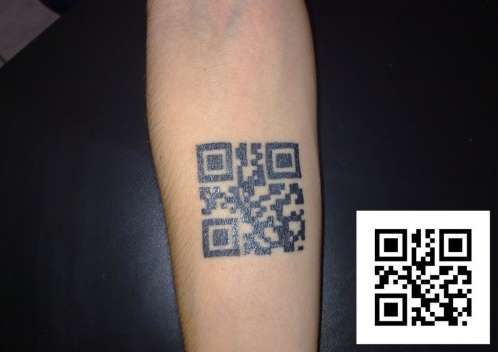 The QR Code Tattoo Reads "Hold On" When Scanned

Meghan Young — May 22, 2011 — Tech
References: geekytattoos & neatorama
Share on Facebook Share on Twitter Share on LinkedIn Share on Pinterest
It is pretty crazy to think about how prevalent and pervasive technology has become in our lives, so much so that one person has decided to brand herself with a QR code tattoo. I have to admit, however, that it looks pretty cool. At the end of the day, it not only holds meaning to Jully Nascimento from Brazil, the woman who got the tattoo, it also is a clear indicator of what generation she belongs in.

Inked by André from True Love Tattoo, the QR Code Tattoo is also amazingly scannable. When someone does scan it, it reads "Hold On," which is the name of a song by Good Charlotte. According to Geeky Tattoos, that song helped Jully through a rough time during her adolescence.
5.7
Score
Popularity
Activity
Freshness
View Innovation Webinars