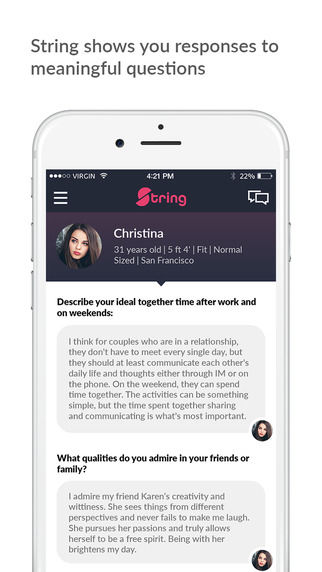 The 'String' Dating App is Inspired by a Psychological Study

Katherine Pendrill — April 15, 2016 — Tech
References: itunes.apple & bustle
'String' is a new dating app inspired by the Arthur Aron's psychological study '36 Questions That Lead to Love.' Now a woman named Helen Huang has taken the study and used it as the premise for a new matchmaking app.

String differs from other dating apps in that it does away with the Swipe-style interface made popular by Tinder. Instead, String uses a series of questions inspired by Aron's psychological study to help users make more meaningful connections. To use the app, users must begin by answering two out of six curated questions that are meant to highlight their communication style. When browsing through the responses of potential matches, users will only be able to see a thumbnail photo of the other person. Only when a match has been confirmed will both users be able to see each other's photos.