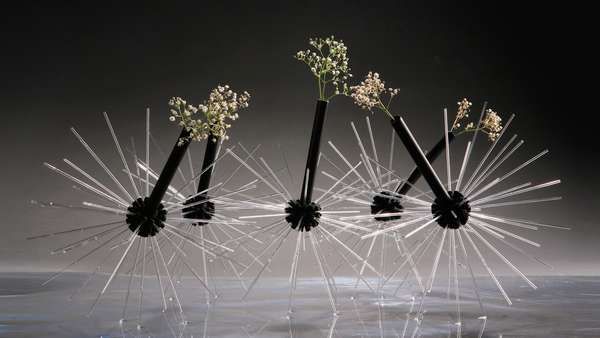 Meghan Young — June 29, 2012 — Art & Design
References: shayshafranek & fastcodesign
Share on Facebook Share on Twitter Share on LinkedIn Share on Pinterest
The Prosthetic Vase offers a new perspective of the traditional flower holder. Shay Shafranek, the Israeli designer behind the creation, dramatically observes, "An average 21st-century human wishes to bring nature into the home environment. He cuts it from its life source, sentencing it to death and puts it in a special coffin, a preserving vessel in which the flower will slowly but surely wither and die.” Inspired to make a change, he dreamed up the Prosthetic Vase.

Equipped with glass capillary-like tubes, the Prosthetic Vase provides artificial roots that help to actively keep the flower alive rather than letting it slowly rot away. A complex creation, a few prototypes were created to try to perfect the process. Nevertheless, Shafranek notes, "The concept of this specific vase is not its functionality but the story it tells."
1.2
Score
Popularity
Activity
Freshness
Get Better and Faster