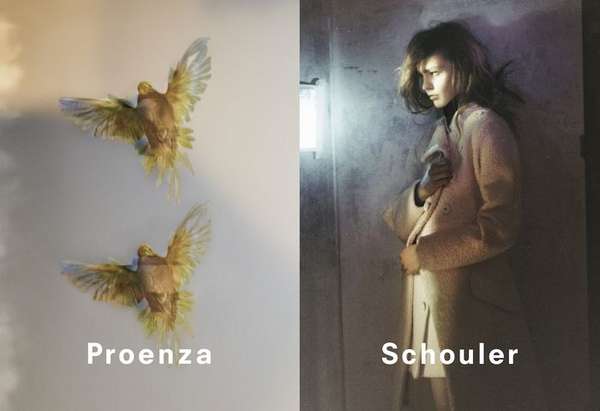 Meghan Young — July 30, 2013 — Fashion
References: proenzaschouler & fashioncopious.typepad
The Proenza Schouler AW13 ad campaign may have a dark edge, but it is inspired by all things soft and airy. As written on Fashion Copious, "The Fall Winter 2013 ad campaign explores the themes of softness of color, form and texture introduced in the runway show. The visuals explore the idea of air, using light and atmosphere to capture a mood."

Shot by photographer David Sims, the Proenza Schouler AW13 ad campaign captures this mood by way of comparisons with flighty, feathery friends. Whether the images are abstract shots of wings or pixelated images of parrots, the idea is there. Model Sasha Pivovarova is cast in a soft light herself. Outfitted by stylist Marie Chaix, her autumn looks were perfected by hairstylist Paul Hanlon and makeup artist Diane Kendal.
4.2
Score
Popularity
Activity
Freshness