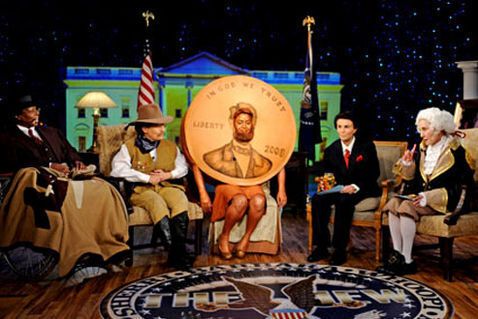 Heads of State on 'The View'

Whoopi Goldberg dressed as Franklin D. Roosevelt who was wheelchair-bound because of polio, Joy Behar impersonates gun ho Teddy Roosevelt, Sherri Shepherd is a really gigantic penny with Abraham Lincoln on the front, Elisabeth Hasselbeck is trying to look like Ronald Reagan, and Barbara Walters is dressed like George Washington whom she must have known personally.

The other images in the gallery show Halloween costumes from the show from previous years.
2.7
Score
Popularity
Activity
Freshness
Get the 2023 Trend Report FREE