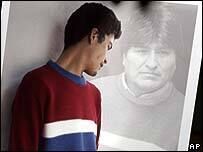 Evo Morales became famous during the recent election campaign for wearing a comfortable red, white and blue sweater at public events. Since winning the election, he has stubbornly refused to abandon his casual look in favor of the expensive suits typically favored by world leaders. Morales has even greeted heads of state from China, Spain and South Africa wearing his wooly top.

The casual look -- and more importantly, Morales' refusal to change to suit other people's expectations of how a president should dress -- have won him even more respect in his country.

Now a Bolivian businessman has begun designing and manufacturing a line of sweaters inspired by Morale's favorite outfit.

"This is going to become a line we call 'Evo Fashion' that we hope will appeal to young people," said Raul Valda. "We did not want to do another sweater, a copy of the one that the president wears, but a symbol of the president and what he wants to do."