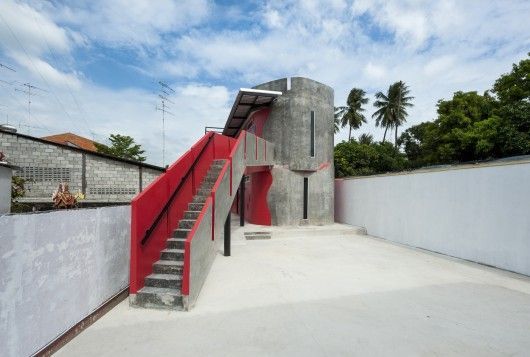 Amelia Roblin — February 7, 2014 — Art & Design
References: piriyaprakob.wordpress & archdaily
Share on Facebook Share on Twitter Share on LinkedIn Share on Pinterest
With the contemporary style in which the Prachasongkroa Kindergarden was designed, the school really could be situated anywhere in the world. It may surprise you, however, to learn that this institution has been built in the small city of Kanchanaburi, Thailand.

The team at NPDA Studio exercised some wonderful creativity with the plans for this whimsical edifice. Working with a very constricted site, the designers played with unique forms to create an environment that would instead encourage and expand the imaginations of its young occupants. One end of the Prachasongkroa Kindergarden even appears to have been modelled off of a medieval European castle tower or a fortress keep. For added fun, the architects integrated highly contrasting colors, finishes, textures and shapes to stimulate the children's minds and senses.
1.7
Score
Popularity
Activity
Freshness
Get Better and Faster