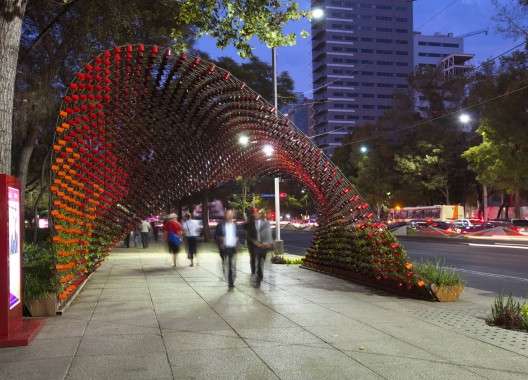 The Portal of Awareness by Rojkind Arquitectos is Full of Movement

Meghan Young — November 21, 2012 — Art & Design
References: rojkindarquitectos & inqmind.co
Share on Facebook Share on Twitter Share on LinkedIn Share on Pinterest
The undulating form of the Portal of Awareness installation is impressive on many different levels, two in particular. Not only does it appear to be moving despite being a completely static structure, it is also made up of hundreds of coffee cups, 1500 to be exact.

Designed by Rojkind Arquitectos and located in Mexico City along one of the most important avenues, Paseo de la Reforma, the Portal of Awareness installation is one of eight creations commissioned by Nescafé. Tasking the artists, which included Francisco Serrano, Mario Schjetnan and Bernardo Gómez-Pimienta, to use a specific number of coffee cups, Rojkind decided to create a canopy using a rebar frame. Using mugs of different shades, a visually striking gradient was achieved.
5.1
Score
Popularity
Activity
Freshness
Jeremy Gutsche Keynote Speaker