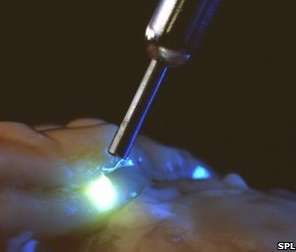 Amanda Chang — October 4, 2010 — Lifestyle
References: bbc
Share on Facebook Share on Twitter Share on LinkedIn Share on Pinterest
For those who are afraid of going to the doctor due to some of the more invasive procedures used to diagnose disease, perhaps these portable laser devices, which are being touted as an efficient non-invasive procedure, will put you at ease. These laser devices use a method called Raman spectroscopy, which is useful in detecting early signs of breast cancer, tooth decay and osteoporosis.

According to scientists, this kind of non-intrusive modern technology would speed up the diagnosis of an illness, as it is much cheaper and also much more accurate.
0.4
Score
Popularity
Activity
Freshness
Get Trend Hunter Dashboard