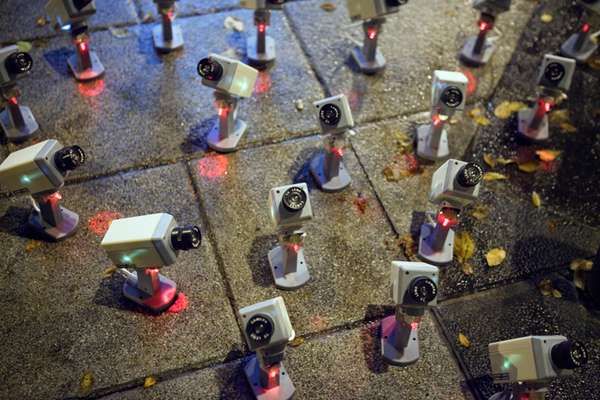 The Politicians Under Surveillance Series is Adorably Vigilant

Meghan Young — December 14, 2011 — Fashion
References: luzinterruptus & theplatform.info
Share on Facebook Share on Twitter Share on LinkedIn Share on Pinterest
The Politicians Under Surveillance series puts political leaders under the microscope in a rather adorable manner. Through the use of 75 fake, yet 'animated' security cameras, the series becomes both an art installation and a commentary on the unjust, power-hungry individuals that rule the world (or, specifically, Madrid). Chinese artist Ai Weiwei would be proud of this series.

Created by studio Luzinterruptus, the Politicians Under Surveillance series was photographed by Gustavo Sanabria. A simple, yet captivating concept, this series took four hours to put together. Although only displayed for 10 hours, the Politicians Under Surveillance series shows that leaders need to be watched and scrutinized in order to keep them in line. Yet as Luzinterruptus observes, "[I]n reality, those that truly keep them under strict surveillance, are the markets, loaded with unlimited power which allows them to overthrow legitimate governments, imposing in their place a race of technocrats of suspect past, in the service of the crisis."
2.4
Score
Popularity
Activity
Freshness
Get the 2021 Trend Report FREE