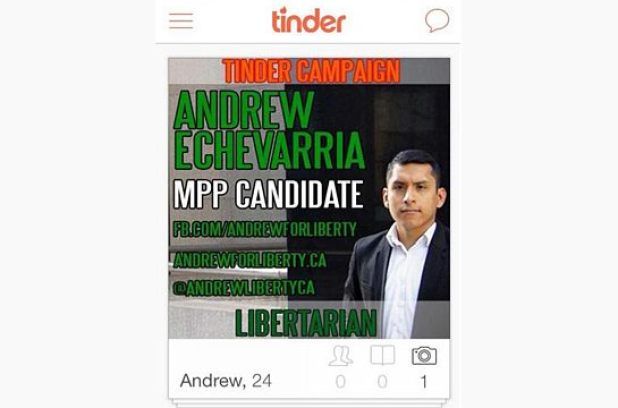 Laura McQuarrie — July 30, 2014 — Marketing
References: thestar & metronews
Share on Facebook Share on Twitter Share on LinkedIn Share on Pinterest
It can be a challenge for a political campaign to reach the public, but instead of knocking on the doors of locals, Andrew Echevarria of The Ontario Libertarian Party hoped to get into the hearts of voters in a rather unusual way.

Instead of campaigning as usual with flyers or posters, the candidate for Toronto's Trinity-Spadina area took to Tinder in the hopes of catching the eyes of local youth. Since the dating app is highly location-based, matchmaking people to politician couldn't be easier. The campaign included provocative messages, encouraging users to "Hook up with Liberty!" and "Swipe right to debate or learn more." Although it's unconventional, the campaign was successful at helping to answer even the most basic questions, like where to vote.
5.5
Score
Popularity
Activity
Freshness
Access Advisory Services