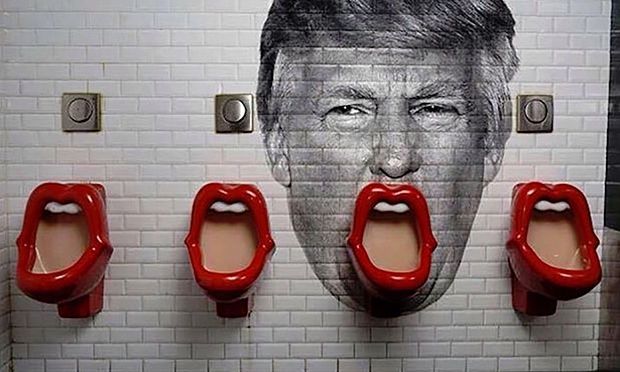 The bar in question is Belushi's Bar at the St. Christopher's Inn in Paris (a cheerful, generic hostel and bar chain that caters to North American backpackers throughout Europe). The men's washroom at the Paris Belushi's features a wall of Rolling Stones-inspired mouth-shaped urinals. In a stroke of toilet humor/visual punning genius, artists William Duke and Brandon Griffin photoshopped an image of Donald Trump's angry face onto the wall. The resulting Trump-urinal chimera very succinctly conveys the message of the political art: politician as potty mouth.

Donald Trump's nomination campaign has been a particularly fertile one for political art and parody, with graphic artists, cartoonists, comedians and the general citizenry of the Internet having a go at every aspect of the outspoken candidate's personality and platform.
6.6
Score
Popularity
Activity
Freshness