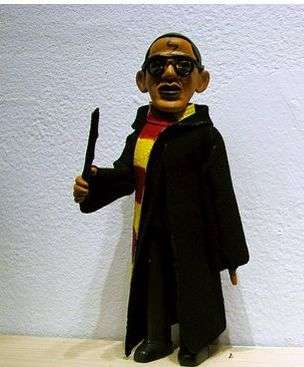 Animal points us to the eclectic collection of Obama action figures we see here was exhibited at the Showroom Gallery in the East Village of NYC last week. Presented at the show were customized action figures by contemporary counterculture artists out of blank, unpainted dolls of the Democratic presidential hopeful.

In the collection, we can see many different interpretations of the Obama action figures. For example, there is an Obama doll dressed as an Easter bunny with pink gigantic ears and all. There is also a character painted in white and mounted on a cross. We can also see Obama as some sort of bespectacled gangster; also present was an Obama doll painted in blue and adorned with pink hair. And lest we forget an Obamacized depiction of Robin Hood.

These are just some of the characters and depictions we can see in the collection. The purpose behind this project was for the artists involved to “...project their vision of America, leading to an eclectic cast of one-of-a-kind characters,” says Animal.com. The proceeds from the sale of these action figures will go to the Obama for America campaign.