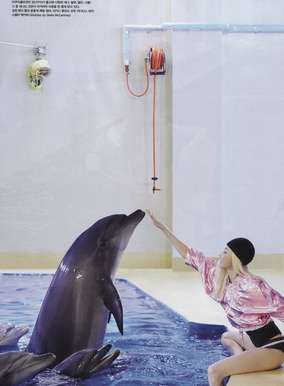 The 'Under the Sea' Shoot Features Playful Marine Mammals

One of the most striking shots in the series is one depicting Han touching the nose of a bottle-nose dolphin as it rises out of the water. Behind the dolphin are three others, each looking playfully towards Han and waiting for their turn in the spotlight. Another equally adorably shot shows Han in a sleek, black- and white-striped romper, holding a mop. Beside her is a gigantic sea lion, looking towards the camera with doleful, puppy dog eyes.

This editorial is a fun combination of manufactured fashion designs and equally astounding natural creations. The addition of cute animals to an already memorable photo shoot makes 'Under the Sea' one of the most visually striking editorials of the summer.
2
Score
Popularity
Activity
Freshness
View Innovation Webinars