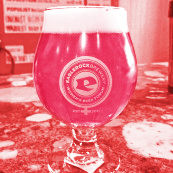 Katherine Pendrill — July 14, 2015 — Lifestyle
References: eaglerockbrewery & munchies.vice
Share on Facebook Share on Twitter Share on LinkedIn Share on Pinterest
One California brewery is making pink beer by using insects to achieve an unusual rosy hue. While there are other pink beers on the market, most are colored using synthetic dyes. The Eagle Rock Brewery has found a more natural source of red dye in the form of South American insects.

To achieve its deep pink color, the Eagle Rock beers rely on the use of a pea-sized bug called 'Cochineal.' These bugs are native to Central and South America, where they feed on crimson juices from prickly pear cactus plants. After the bugs are harvested, they are dried and then crushed in order to create a natural red dye, which is referred to as "cochineal extract." Aside from the red dye, the Eagle Rock beer achieves its brilliant pink color through the addition of pomegranate, raspberries, strawberries and hibiscus.

The pink beer is not just a novelty product, but also a promotional brew that is offered at events raising money for breast cancer awareness.
0.4
Score
Popularity
Activity
Freshness
Attend Future Festival