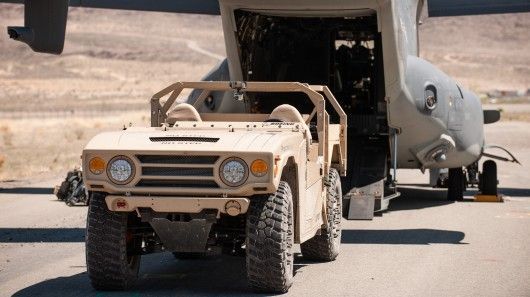 Rahul Kalvapalle — April 23, 2014 — Autos
References: boeing & gizmag
Share on Facebook Share on Twitter Share on LinkedIn Share on Pinterest
Boeing's Phantom Badger may sound like the main protagonist of a children's cartoon, but it packs more features than most fully grown men could manage. The Phantom Badger is a military support vehicle that has been specially designed to fit into the belly of an Osprey aircraft, allowing to be easily transported to and from different military arenas.

The Phantom Badger has a 240-horsepower multi-fuel engine with four-wheel drive, all-wheel steering and a top speed of 130 km/h. It is equipped with both hydraulic and suspension systems that allow it to travel speedily and steadily in rough conditions.

The vehicle's 35-inch tires can handle being driven on logs as thick as telephone poles, and can carry a payload of 1,500 kg -- an improvement over comparable vehicles.

The Phantom Badger has a modular rear section that can be adapted and manipulated for specific missions such as reconnaissance, search & rescue, casualty transport, direct action with weapon mounts or explosive ordnance disposal.
5.4
Score
Popularity
Activity
Freshness
Get Better and Faster