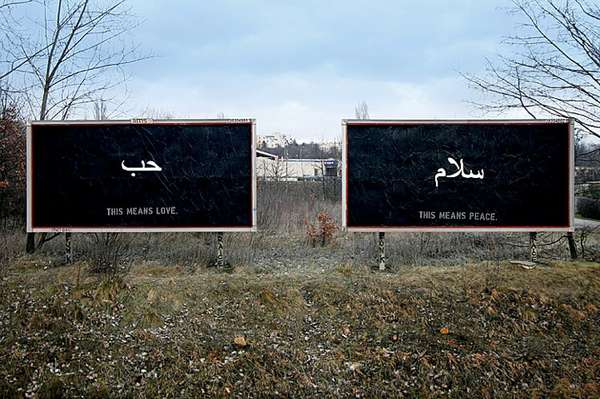 Ana Lopez — December 30, 2011 — Art & Design
References: peterfuss & mymodernmet
Share on Facebook Share on Twitter Share on LinkedIn Share on Pinterest
In a world polluted with wars, hatred and violence, it’s refreshing to find public art manifestations of love and peace, like the billboards created by political street artist Peter Fuss. These two large posters entitled ‘This Means Love’ and ‘This Means Peace,’ were designed to question people’s cultural and religious perspectives and stereotypes.

Simply but powerful, these black pieces have the words Love and Piece written in Arabic and a message underneath them, in the artist’s signature typography, that says ‘This Means Love’ and ‘This Means Peace.’ These clear and direct posters show that despite differences, in every language and culture these two words exist and signify the same for humanity.