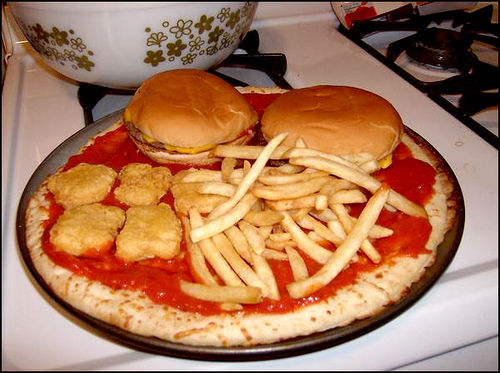 The McDonald’s pizza topping heads the list of the 10 strangest pizza toppings I could find. The criteria to make the list is that they must have been made AND eaten, otherwise the impact is lost.

Before the weird stuff, did you know America’s favorite pizza topping is pepperoni while in the UK it is chicken?

McDonald’s Pizza Topping - The gold medal for junk food is a pizza topped with McDonald’s items. Click here to see photographs outlining the whole process of making this pizza. For the record, the whole pizza was consumed. Anyone care to work out the calories in that?

Star Wars Pizza - Maybe unusual in design, only but it unquestionably makes the cut for being really funny. Love the Yoda and Darth toppings.

Squid Ink Pizza - The Japanese turn their attention from strange ice cream flavours to pizza with this inedible looking dish. The tomato sauce is replaced with a black squid ink sauce. I just don’t think I could ever go there.

Halloween Pizza - The cheese spider topped Halloween pizza is a bit lam, and would struggle to strike fear in the hearts of anyone, but it is a great idea to do yourself, as you could make sure your cheese shapes are a lot more terrifying.

Getting Fruity - Not technically a pizza, this cottage cheese and fruit version does come on a pizza base, it is just not cooked. Someone got every excited when describing their inspiration and over-egged the pudding.

"My Fruit Pizza is a filling colorful dessert that epitomizes tropical and summer days yet can be made year round. The tangy blend of different fruits on a cream cheese filling rounded out with a sugar cookie crust is truly a culinary delight," the creator says.

Cheese and grapes - Traditionally accompanied by wine, apparently gorgonzola and grape pizza is actually very delicious. This is one I just might try.

Sushi Pizza - This almost trumps the squid ink pizza on the one I would most like to eat. Pizza on its own is great, sushi on its own is great. The two combined is not great.
5.2
Score
Popularity
Activity
Freshness
Get the 2021 Trend Report FREE