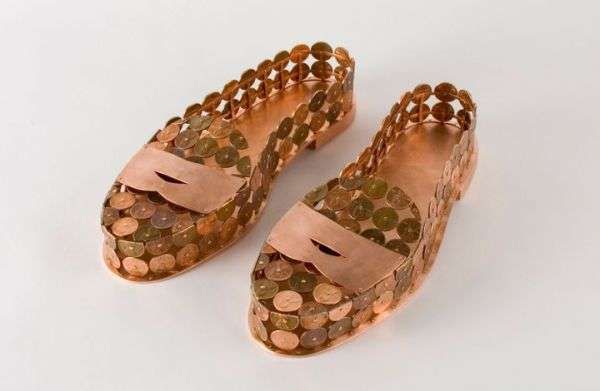 Meghan Young — July 16, 2013 — Fashion
References: sonyaclark & neatorama
Share on Facebook Share on Twitter Share on LinkedIn Share on Pinterest
The Penny Loafers by Sonya Clark, an artist born in Washington, DC, and based in Richmond, Virginia, is a literal take on the classic slip-on shoes. They have been crafted entirely out of pennies. Even the frame used to form the common footwear silhouette was made out of copper. Although it would be easy to chock up the design to a casual gimmick, there is more to the meaning behind it than first meets the eye.

The Penny Loafers by Sonya Clark isn't the first time she has worked with the material. She has a particular affinity towards it, stating, "I relate to the color of the metal because it is the color of my skin. In anthroposophical medicine, copper alleviates poor memory. By using copper, I reconnect with my ancestry and reawaken lost memories of cultural identity."
4.3
Score
Popularity
Activity
Freshness
Get the 2023 Trend Report FREE