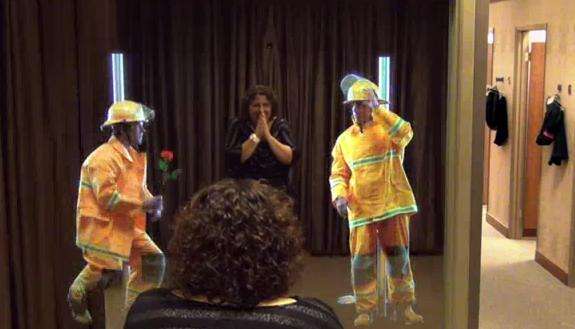 Katherinev123 — November 25, 2011 — Marketing
References: styledtosurprise_ & psfk
Share on Facebook Share on Twitter Share on LinkedIn Share on Pinterest
Imagine trying on an outfit at a store and looking into the mirror, only to see two firemen in front of you! This is what shoppers experienced at the Penningtons' Mississauga, Ontario, location as part of Penningtons Styled to Surprise campaign.

An initiative created by DDB Canada to give "plus-size fashion a makeover," the Penningtons Styled to Surprise campaign featured a "magic mirror" triggered by a motion sensor. Once a shopper stepped on a strategically placed rectangle on the floor, two firemen appeared in the mirror, descending from poles. The firemen would looked appreciatively at the shopper's outfit and then proceeded to compete against each other for her attention -- for instance, one would offer the shopper flowers while the other would draw a heart on the mirror.

According to the video description, those who share the Penningtons Styled to Surprise video will get a chance to win a $1,000 shopping spree for themselves and a friend.
2.8
Score
Popularity
Activity
Freshness
Attend Future Festival Virtual