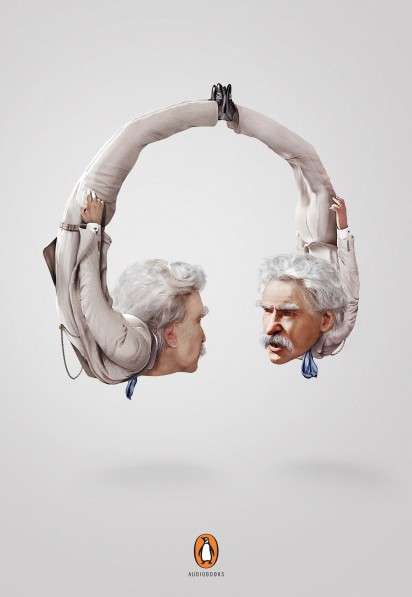 Meghan Young — June 28, 2013 — Marketing
References: mccannworldgroup & ibelieveinadv
Share on Facebook Share on Twitter Share on LinkedIn Share on Pinterest
The Penguin Audiobooks ad campaign may seem baffling at first. It looks like famous literary figures have decided to take up a new, more acrobatic profession. William Shakespeare, Mark Twain and Oscar Wilde appear to be doing a surreal backbend in front of a mirror. Nevertheless, they are forming the look of headphones.

Conceived and executed by the McCann Worldgroup ad agency branch based in Mumbai, India, the Penguin Audiobooks ad campaign was art and creative directed by Rohit Devgun and Talha Nazim with illustrations by Lamanoestudio.cl. It is hilarious to see the heads of such prolific writers enlarged to mimic the cups of the headsets. Aside from these quirky illustrations, the Penguin Audiobooks ad campaign posters are relatively minimalist, which allows people to focus on what really matters.
3.4
Score
Popularity
Activity
Freshness
Jeremy Gutsche Keynote Speaker