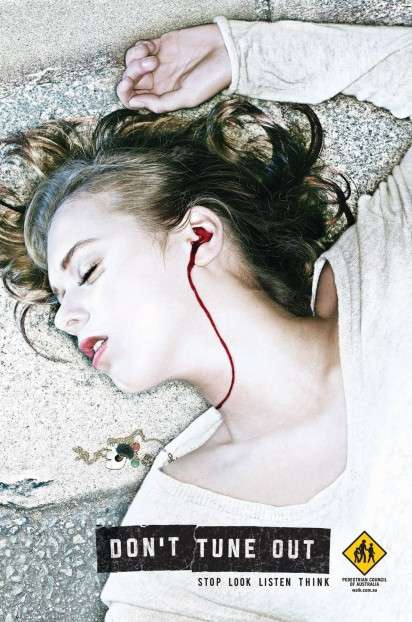 Meghan Young — May 1, 2012 — Marketing
References: ddb & ibelieveinadv
Share on Facebook Share on Twitter Share on LinkedIn Share on Pinterest
The Pedestrian Council of Australia 2012 ad campaign may be visually disturbing, but it is also very eye-opening. It shows that accidents are never just the other person's fault. Oftentimes, they can be avoided if people (namely pedestrians) keep their wits around them as they walk about.

Created by Sydney-based ad agency DDB, the Pedestrian Council of Australia 2012 ad campaign is comprised of three images, each of which depicts a person lying prone on the ground with blood seeping out of their ears. Paired with the tag line, "Don't tune out. Stop, look, listen, think," it becomes blindingly clear that the blood takes on the form of earphones. By doing so, it shows that any distraction can be life-threatening.
3.8
Score
Popularity
Activity
Freshness
View Innovation Webinars