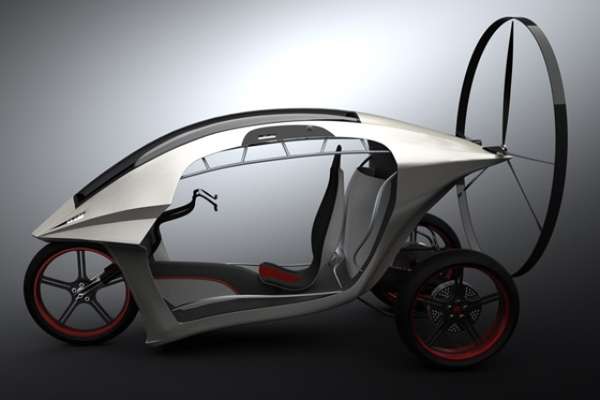 Michael Hines — August 28, 2011 — Autos
References: behance.net & yankodesign
The ParaMoto Trike is a conceptual electric vehicle designed to take to the skies. The ParaMoto Trike was dreamed up by Serbian designer Zvezdan Nedeljković, who designed the vehicle as a way of combining his three passions of flying, motorcycling and design.

The trike is an electric-powered vehicle with an ergonomic and ultra-modern design. The vehicle is low on safety features, so it is not ideal as an everyday driver. What the ParaMoto Trike lacks in doors and windows, it makes up for in awesomeness. The rear end of the trike has a fan mounted to it and a parachute hidden in the roof. The end result is a tricycle that can be driven off of a cliff and flown in the air just like a hang glider.

Flying cars are slowly but surely becoming more common and easier to build. Don't be surprised if you look up into the sky one day and see something like the ParaMoto Trike above you. You can't keep cars and trikes grounded forever, after all.
2.9
Score
Popularity
Activity
Freshness