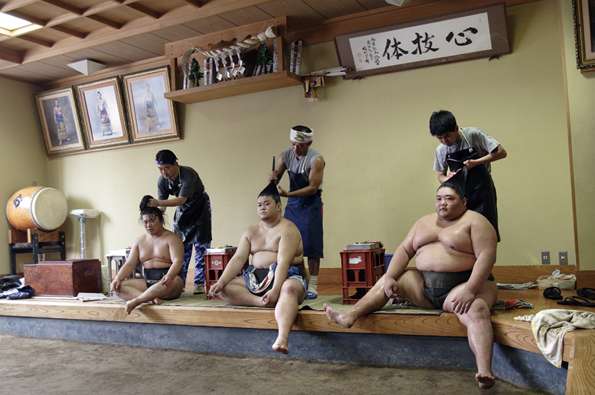 Meghan Young — April 24, 2012 — Lifestyle
References: paolopatrizi & itsnicethat
Based in Japan and working as a documentary photographer, Paolo Patrizi often follows a particular theme as outlined on his website: "The contradictions between traditions and modernity and cultural disconnections produced from too rapid economic growth." In this case, Paolo Patrizi captures an age-old sport in the modern world. Although sumo has its origins in religious rites, forcing wrestlers to observe a strict code of behavior, "gambling and organized crime have become as entrenched in sumo wrestling culture as topknots and obesity," according to the photographer.

Paolo Patrizi presents the world with a behind-the-scene look at sumo wrestling. While many other sports, namely American televised ones, grant backstage access to locker room shenanigans, the same cannot be said for more exotic athletes such as sumo wrestlers. Paolo Patrizi goes behind the lines to see exactly what happens outside of the sumo ring.
3.8
Score
Popularity
Activity
Freshness