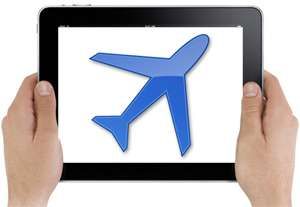 OTG Management Provides Free iPads For Use Between Flights

Katherinev123 — July 6, 2012 — Tech
References: otgmanagement & brandchannel
Share on Facebook Share on Twitter Share on LinkedIn Share on Pinterest
OTG Management is an airport concession operator, and it has just announced that it will roll out 7,000 iPads for free traveler use across three major airports. So far, the iPads will be available only at LaGuardia, Toronto Pearson airport and Minneapolis-St.Paul International.

The iPads, which will be locked down, are available for anyone to use, and each tablet will already come pre-downloaded with apps, specifically those that allow customers to check in for their flights, update their Facebook statuses and order food (which will be delivered in 15 minutes or less).

OTG Management plans to integrate the iPads with its food offerings, bringing the company's restaurant service full circle. What's more, OTG's CEO Rick Blatstein says that the overall goal is to help exhausted and stressed passengers “feel calm and connected." According to GigaOm, the developers behind the project even nicknamed it "Operation Zanax"!